Offering a new take on an old weapon, im bringing my 2nd edition metal Tallarn Autocannons into the 41st millennium. Here is where we started straight from the Games Workshop website:

Combat patrol at Adepticon is quickly over shadowed by bigger things like the Grand Tournament and the Team Tournament. Heck, I even read more about the Gladiator event than anything related to Combat Patrol! This is really unfair to the Combat Patrol event and I found it to be my favorite event of the weekend. Combat Patrol is like speed dating for 40k, you get to meet a ton of people really quickly and the games are very fast and very brutal. Each of my four games was easily completed in less than 40 minutes. The action is fast paced and very unforgiving, unlike in an 1850 point game when you make a bad decision in Combat Patrol it is a much harder hole to dig your way out of. Another cool thing about combat patrol is that is takes place in the Grand Ballroom while the Team Tournament is going on – so there is plenty to look at between games!

With the crisp smell of our new 6th Edition rulebooks fresh in our olfactory receptors the internet punditry is in full swing churning out observations, advice and apocalyptic predictions. Amidst the din of lamentations and gnashing of teeth about the new found dominance of flyers, skyfire, flakk missiles and interceptors a small number of astute individuals are preparing for what will be the true nightmare of 6th Edition – Psykers. Psychic defenses, except in the case of Wolves and Eldar, have been significantly diminished across the board. Psychic Hoods no longer affect huge portions of the battlefield and they have no ability to block ‘defensive’ powers (blessings) cast on enemy units. Short of an enemy psyker failing their leadership test the ability to reliably interdict enemy psychic powers is almost nonexistent in many armies, sure you can still roll a 6+ ‘Deny the Witch!’ but I would hardly refer to that as ‘reliable’. While the current status of ‘Psychic Defense’ in 6th Edition can be batted around until we are all blue in the face, what I choose to focus on is the other 80% of armies who just got a huge boost from psykers.

More after the jump >>>
Chronicled by Tallarn at 4:54 AM 3 comments: Links to this post

6th Edition Inital Thoughts (from yet another random guy)

After getting in a game of 40k this weekend, and watching a couple others as well, I have complied some thoughts about game mechanics and how it looks like the battlefields are going to be shaping up. So instead of bitching about this that or the other thing, because its not going to get changed for a few years anyway, ill just point out some things I noticed.

More after the jump >>>
Chronicled by Tallarn at 5:26 AM 4 comments: Links to this post

As we all take a day off to celebrate 4th of July here in America, there are few things to remember besides just hot dogs, hamburgers and fireworks and historical facts you probably didn't know. One thing we should really celebrate first - the good old Stars and Stripes:


More after the jump >>>
Chronicled by Tallarn at 5:53 AM 2 comments: Links to this post 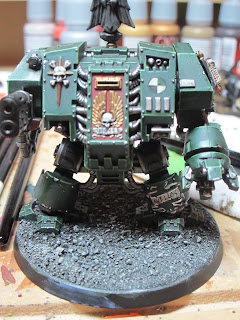 With this weekend's release of the rulebook, I figured it was only a matter of time before the starter set follows. If I am going to meet my goal, something seldom achieved in the flight-of-fancy, army de jour, painting lifestyle of mine, I needed to get after it. All that stands between myself and the finish line is a dreadnought. So I started to take a swing at it.


Mars
I am that guy, the one your mother warned you about. Twice.