Planetary Empires: Round One! (part 2)

Round two was upon me and I pulled the Dark Angels of the 'diabolical man-child' who's house we were playing at and who's campaign we were playing in. Really dude has some lovely stuff, his terminators and Captain in particular are well done. Luckily for me his dreadnought had a 'bounty' placed on it by one of the other players, meaning in a previous game the dreadnought tore someone up and they decided to put a 'one beer bounty' on the guy - whoever destroys the unit with the bounty on them collects the bounty. I positioned the relentless Long Fangs just out of range from the dreadnought, which had a plasma cannon, and deployed the rest of my force. 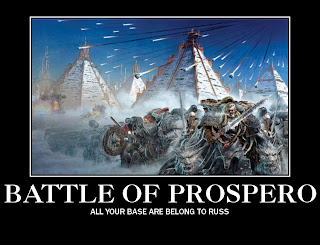 Planetary Empires: Round One! (part 1)

With our Space Puppies resting peacefully in their cozy new doggie beds, and not those crappy Wal-Mart ones either - we're talking about the real deal Costco super soft beds, on the super secret moon base it was time to venture out into the night and find some kibble. Five of us gathered in the 'gaming shed' for an afternoon of rapid fire 1,000 point gaming. Arrayed on the table were Dark Angels, Orks, Eldar and another Space Wolf player. For the first week of battles the games were to be played at 1,000 points on a 4x4 table, this represented the players sending out their reconnaissance forces to find the enemy. Also in this round the Hive City, which is very important apparently as it 'counts as' one of each of the other building types, was 'in play' becuase at the end of the two week round whomever won the most 'cities of death' games would gain control of the Hive city.

The Space Marine Bike is a relatively common mode of transportation for Space Marines in the Warhammer 40,000 tabletop miniatures game. It is a two-wheeled vehicle reminiscent of modern motorcycles. Though classified as a "vehicle" for obvious reasons, in-game, bikes are treated as infantry models that can move further and are a bit more resilient. Space Marine Scouts can also make use of Space Marine Bikes, with slightly different rules from those of Space Marine Bikers.

More after the jump >>>
Chronicled by Tallarn at 6:07 AM No comments:

For most of us Planetary Empires is simply a book sitting on the shelf in our local game store, gathering dust. For others it becomes a chance to create a truly unique experience where cagy veterans can gather round the tables and trade blows while talking smack, trying new armies and building a sense of camaraderie rarely seen in most gaming circles. It is an interactive campaign with many players that follows a general format that is easily modified, all while building veteran abilities for your units and trying to maintain a tenuous grip on your territories and trying to gain new ones. One of the guys ('guy' is an inadequate description, perhaps 'diabolical man child' would be more appropriate) in my local gaming area suggested a Planetary Empires campaign a few months ago, with some hesitancy I accepted in the spirit of trying something new.

Storm Troopers arrived on the scene in 1996 with the release of the 2nd edition codex. With their foppish little barrettes, horrible faces and single pose they were a dream for hobbyists, or not.  My Storm Troopers have always been a command squad for at least 3 paint jobs that I remember.

Display boards for your army come in all shapes and sizes, from the complex to the very basic. Using a simple 20 x 30 inch picture frame using the glass for your display surface is a very simple way to do it, adding some textured paper with a color matching your army underneath the glass can help tie it in to your army.

The Squats have been out of the current games and model production by Games Workshop since the 1990s. The release of the third edition of Warhammer 40,000 in 1998 marked the removal of the final elements of the Squat rules from the game. The last miniatures to be released by Citadel were the Epic Squat war engines (such as the Goliath Mega Cannon) in 1994, though the release of Warhammer 40,000 scale had stopped some four years previously in 1990. Though no new models were released, sales did continue at a low level through retail stores and through Mail Order for several years until they were eventually discontinued completely.

Recently I have been taking a hard look at the Space Wolf army I am rebuilding, what I am seeing in the local gaming scene and what I see with what other people post online. So I gotta ask a question here, what are we doing? The armies I see on the Internet and in the tournaments are all running 5 and 6 man Grey Hunter spam in razor backs. Some guys are running twin linked assault cannons, hoping for that magical '6' so they get rending, and others are running a lascannon twin linked plasma combo for some odd reason. Either way - I don't get it!

The Ordinatii were enormous siege machines available to Imperial Titan Legions or Tech-Guard armies for the Epic 40,000 tabletop miniatures game. The rules for them can be found only in the November 1995 issue of White Dwarf magazine published by Games Workshop.

More after the jump >>>
Chronicled by Tallarn at 5:08 AM No comments:

When I first walked into the local game store the owner, who's name and location I leave out to protect the innocent, was playing a game with some odd little ships on a table. He was quite excited about the game and even though it was the first time he had ever seen me, he enthusiastically tried to show me what it was all about. Despite all his enthusiasm I was immediately turned off by the ridiculous paddle wheels on the side of the 'American' ships. The theme, mechanics and background were completely irrelevant to me because of those god forsaken paddle wheels. Yes, those gigantic things on the side of this aircraft carrier are paddle wheels.