The Exorcist is a specialized artillery platform utilized by the Sisters of Battle in the Warhammer 40,000 tabletop miniatures game. It is usually fielded within a Witch Hunters army making use of the forces of the Adepta Sororitas. The current model draws on cues from a pipe organ more than any modern day weapon system, although the original model was most likely inspired by the Hydra-70 rocket system.


More after the jump >>>
Chronicled by Tallarn at 6:52 AM No comments:

‘Great, kid. Don’t get cocky.’ Some sage advice there from Han himself; well - I got cocky. I got full of myself and I didn’t pay attention during terrain set up, and during deployment I made some mistakes. I didn’t think through the objectives and I ended up chasing my tail for 4 rounds while my opponent basically drove in reverse and picked me apart at range while I struggled to catch up. I made all my mistakes early and my list simply couldn’t make up the difference.

The Valkyrie Airborne Assault Carrier is an armed VTOL transport used by the Imperial Navy in the Warhammer 40,000 tabletop game. In the game background, the aircraft's role is the transportation of special forces infantry in the same way as the UH-60 Blackhawk helicopters used by the 160th SOAR of the US Army. The Valkyrie acts as an armed troop transport providing fast deployment to ground troops in a survivable platform that can lay down suppressing fire for the troops it delivers.

With round two coming to an end I again had three wins under my belt. (Mars agreed to play again right before the conquest rolls happened) With three conquest rolls to make I had to try and gain the final two tiles I needed so that I could try and wrap up the campaign in round three. I needed another tile in the center of the board so I could have better rolls against the other players, in Planetary Empires having a tile adjacent to your target increases your odds of taking the tile. With my first roll I went for the space port of the Tyranid player because it sat in the middle of the northern portion of the board and would give me access to everyone else. With my first roll I seized the spaceport and gained my 9th tile, you need 10 to meet the first campaign victory condition, so I had established my foothold in another portion of the board.  Unfortunately for me the foothold didn't help as I failed my next two conquest rolls miserably and stayed at nine tiles, DOH!

More after the jump >>>
Chronicled by Tallarn at 7:41 AM No comments:

The Collegia Titanica is the division of the Adeptus Mechanius that commands the Titans - colossal robotic combat walkers which are the most potent ground weapons capable of being deployed by the Imperium. The Collegia was one of the groups of the Adeptus Mechanicus that went over to the Warmaster Horus almost en masse alongside the Legio Cybernetica during the Horus Heresy. The name "Adeptus Titanica" is also used for the corps of Titans fielded by the Mechanicus. 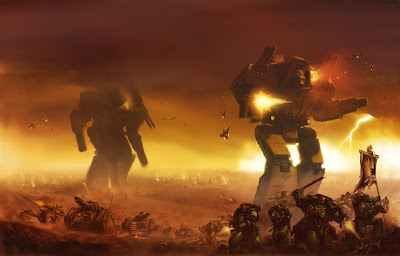 More after the jump >>>
Chronicled by Tallarn at 6:25 AM No comments:

For my second game of round two I played a game with one of the other Space Marine players in the planetary empires campaign against Salamanders. Because I had two more tiles and he has an additional manufactorium he had 200 points more than me for the battle, again - select your tiles carefully to avoid battles like this! So with my wolves at 1500 points we mounted up to face some 1700 point Salamander fury.


More after the jump >>>
Chronicled by Tallarn at 7:15 AM No comments:

Each round of the campaign lasts for two weeks as all of us in the campaign have real world commitments that limit our gaming time. We meet up when we can but its very rare to see everyone in the same room at once. So for this round I managed to get in two games, one each week, against the lone Tyranid player and a Marine player using Salamanders. My first game for this round would be against the bugs and my opponent had been making a mess of the other players winning his first few games as I had. Due to the amount of tiles I had compared to him and his additional manufactorium he went in to the battle with 100 additional points, so I would start the battle already with a handicap. Campaign note: Winning territories in Planetary Empires can good and bad, select your tiles carefully because different tiles do different things and greatly effect what you can bring to the table for games; as I learned this week!

More after the jump >>>
Chronicled by Tallarn at 7:24 AM No comments:

The Thunderhawk is a massive, heavily-armoured spacecraft used by the Space Marines for a variety of missions. They carry a payload of powerful bombs and can easily claim the skies above a battlefield. There are currently two different variants that have rules for both Warhammer 40,000 and Epic tabletop games.

Planetary Empires: Round One Conquests and Bounties!

Over the weekend we had the 'conquest round' to end our first turn of the Planetary Empires Campaign. During the 'conquest round' any player who won a game can roll against the territories of the player(s) whom they beat. In my case I had won four battles which gave me the opportunity to try and seize territories from other players. In Planetary Empires it is much easier to take a territory if you are adjacent to it, however because I was consolidated at the super secret moon base, the only things adjacent to me were other space ports down on the planet surface. It seemed to be a perfectly logical step to first seize a spaceport so I went after the ork space port. Luckily I rolled well and gained possession of the space port, gaining a foot hold on the planet!

The Space Marine Attack Bike is a bulkier, more heavily-armed variant of the Space Marine Bike. In appearance, it is just a standard bike with a second rider in a sidecar. The original Attack Bike model was made entirely of metal and armed with a multi-melta released in 1989 during Rouge Trader.

More after the jump >>>
Chronicled by Tallarn at 6:07 AM No comments: